Behind the Movement with Pabitra Benjamin 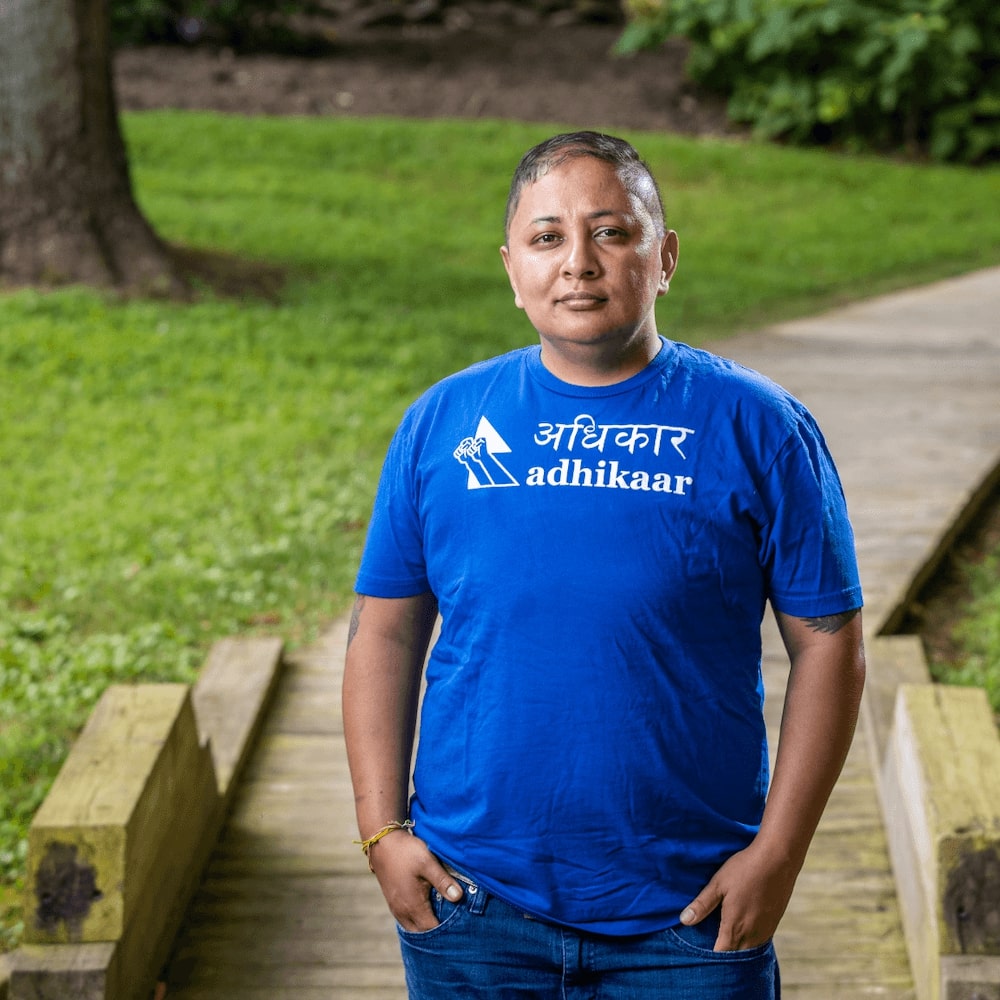 Pabitra Benjamin has served impacted people as an organizer for most of her life. In fact, it’s an essential part of who she is as a person. An immigrant herself, Pabitra has experienced firsthand what it’s like to navigate legal systems, fight back against discrimination and stand up for her rights.

In her current role as Executive Director of Adhikaar (which means “rights” in Nepali), Pabitra helps develop strategies and the organization’s direction so that the Nepali-speaking community in New York is better equipped to fight these same battles. The organization serves and organizes within four main areas: immigrant rights, workers’ rights, healthcare and language justice. In its quest to embrace a social justice vision that’s both dignified and equitable, Adhikaar strives to put Nepali-speaking, working-class voices at the center of its work.

From working on campaigns to stop ballot measures that would limit marriage to a man and a woman to organizing against hate crimes and racial profiling after the 9/11 tragedy, it’s clear that Pabitra was meant for this work. Although she lives in D.C. and runs Adhikaar remotely, her leadership and vision are felt every day.

There’s the question of what led me to where I am at Adhikaar, and then there’s the question of what got me engaged in the work. I came to U.S. in ’87 when I was about six years old. At that time, there weren’t many Nepali migrants in the U.S., and I grew up as one of the few Nepali people in any community where we lived. We’d drive hours just to go meet another Nepali person.

I was about 13 or 14 when I came out as queer. In eighth grade, two mentors, one Jewish guy and one African American woman, had this project to take kids of color and LGBTQ kids out of class once a month to let us talk about what it meant to be different. They were able to help us articulate what it felt like to be an outsider and to empower who we were as young people of color. They saw how articulate I was and took me to summer programs that helped me develop my leadership skills and organize youth conferences.

At the time, there were a lot of issues around targeting youth for “loitering.” So I started fighting back against anti-loitering bills. It was a powerful experience for me to be able to say, “I can be a leader at the age of 15.” In high school, I helped create the Gay Straight Alliance. Since then, it hasn’t really stopped.

I wasn’t supposed to become Adhikaar’s Executive Director. I had taken a job with Amnesty International USA at the time and was just planning to be on the board to help with the transition. All of a sudden, the person that we hired to head hunt an ED basically turned all of her focus towards me. I was like, “No, no, no, I’m not moving in New York! I live in D.C. I have a home and community here. My partner has a business.” She finally convinced me.

You immigrated to America when you were 7. How did your upbringing influence your journey into advocacy work and community organizing?

My mom was a waitress my whole life. I saw a lot of ways in which her English or being an immigrant woman, without formal education really hurt her. I saw ways in which she was abused as a worker — people giving her very little tips and making her run around to get things — and the utter disrespect for service workers.

Her English has always been strong enough to communicate. And we started communicating in English at a young age in our household. But at the same time, there were ways in which people treated her that they would never treat me because of my ability to articulate in English. I think all of those things came to fruition for me at a pretty young age and encouraged me to advocate for workers’ rights when I got older.

It’s a complicated question. I don’t know if I can say what it means for all people who are immigrants. And I know you’re not asking me for that. I immigrated here as a child with my mom and my dad. And my dad is a white U.S. born individual whose grandparents immigrated here from Europe, Norway and Denmark. And what was really interesting when we immigrated here was that my grandmother’s experience as an immigrant was actually pretty prevalent.

It was a powerful experience for me to be able to say, 'I can be a leader at the age of 15.'

I remember my German aunt helping my mother adapt to being an immigrant in this country. We don’t see that as much anymore. I think the level at which things have come to regarding immigration and immigrants, especially of color, is at an extreme right now. And I think that has a lot to do with not just Trump, but honestly things that started under Clinton and continued under Bush’s administration post 9/11. I see some people in our community trying to assimilate and not be who they really are or where they came from. People are forced to take on different identities just to make sure that they can live and survive. At the same time there is a lot of pride in being an immigrant and of being multiple identities. I know I have pride in my Nepali heritage and of being multiple identities that come together as my whole self.

Tell us a bit more about your early organizing efforts after 9/11.

I was in college when 9/11 happened and did a lot of organizing around hate crimes, xenophobia, racial profiling and showing solidarity with Muslim communities. Every situation where we’ve had the opportunity to become better, to become more inclusive, it happens within communities. But unfortunately as a nation, I’ve seen people become more hateful to each other, too.

What does it mean to organize an immigrant community in New York City?

When organizing immigrant communities in general, the most important aspect to remember is that there’s a diversity of people within each immigrant community and there are ways in which we oppress one another. When Adhikaar was created, we were very intentionally a women-led organization that fought the patriarchy within our community. We refused to be like any other Nepali community organization. And we refused to allow the ways in which Nepali associations have formed in the U.S. to dictate how we would serve and organize our people.

Most of our members are New Yorkers. And in New York, a lot of our Nepali folks live in Queens, speak limited English and survive and thrive in large neighborhoods of Nepali businesses, associations, places of worship and so much more. There are a lot of services and opportunities in New York. But at the same time, we have to work really hard to make sure that new immigrants really understand their rights in the United States and aren’t abused within and outside of the community. We want our community to feel safe, thrive and embody who they are. Being in America means you’re granted basic constitutional protections. It’s so important to make sure our community understands their rights and understands how to enforce them.

A lot of our members come through our services. Nepali, for example, is not one of the languages that is readily offered in interpretation and translation. So a lot of people have a hard time navigating various systems, whether it’s trying to find a job or, if they have a job, trying to navigate how to make sure they get their wages or learn to speak English. Political education is incorporated into everything we do. People start to recognize the injustices that they’re facing and that there’s a broader system out there in which we can not just fight against but improve.

In basic organizing principles, people need to see themselves in the work and how it benefits self or family. I think that’s the main reason people get involved in our work. A lot of our members are impacted individuals. We also have volunteers that support us who relate to the issues we work on.

Change is constant, right? Buddhism tells us that no one thing stays the same, including us. I remember when I was younger and working with organizers who organized in the ’70s and ’80s. They were trying to push back in terms of how they organized and thought about things. In college, the internet was just becoming a tool that we could use to our advantage. There’s such a saturation of information now. What does it mean to get your message across? How do you really get your message across? How can you tell what’s fake news versus real news?

What’s not lost in impact-oriented organizing is the day-to-day work that my staff does on the ground with members and the face-to-face interactions and community building to build power. In my opinion, this is the most important piece, especially in immigrant communities. It happens in how we can change an individual from being someone who’s scared to live in New York to someone who’s being bold and a spokesperson for a campaign that is making strategic decisions in how we move. It takes years of work.

The work you’re doing is demanding, no doubt, so it’s important to take time and celebrate the victories. Any wins that you’re particularly proud of?

Many of our domestic workers are making better wages because we helped the Domestic Workers’ Bill of Rights come into play in New York 10 years ago. Nail salon technicians have better protections for their health and well-being. And a lot of people see their wages changing, paid time off and opportunities to take care of their families because we fought for more equitable compensation and workers’ rights alongside other organizations. Because of our work with TPS holders and partner organizations, people have been able to stay here, work and protect their families. And more importantly, because of the dedication of our organizers, we see leaders rising, speaking out and emboldened to become organizers. Those are a handful of the many wins my team has worked so hard to accomplish that I’m proud of.

Behind the Movement
Behind the Movement: Fighting to Cure ALS and Find #CuresForAll with Brian Wallach
Power to the People: Amplified Community Voices Drive Equity in California
The Movement To Remake the Justice System
Tag: Advocacy & Movement Building