Behind the Movement with Ali Noorani 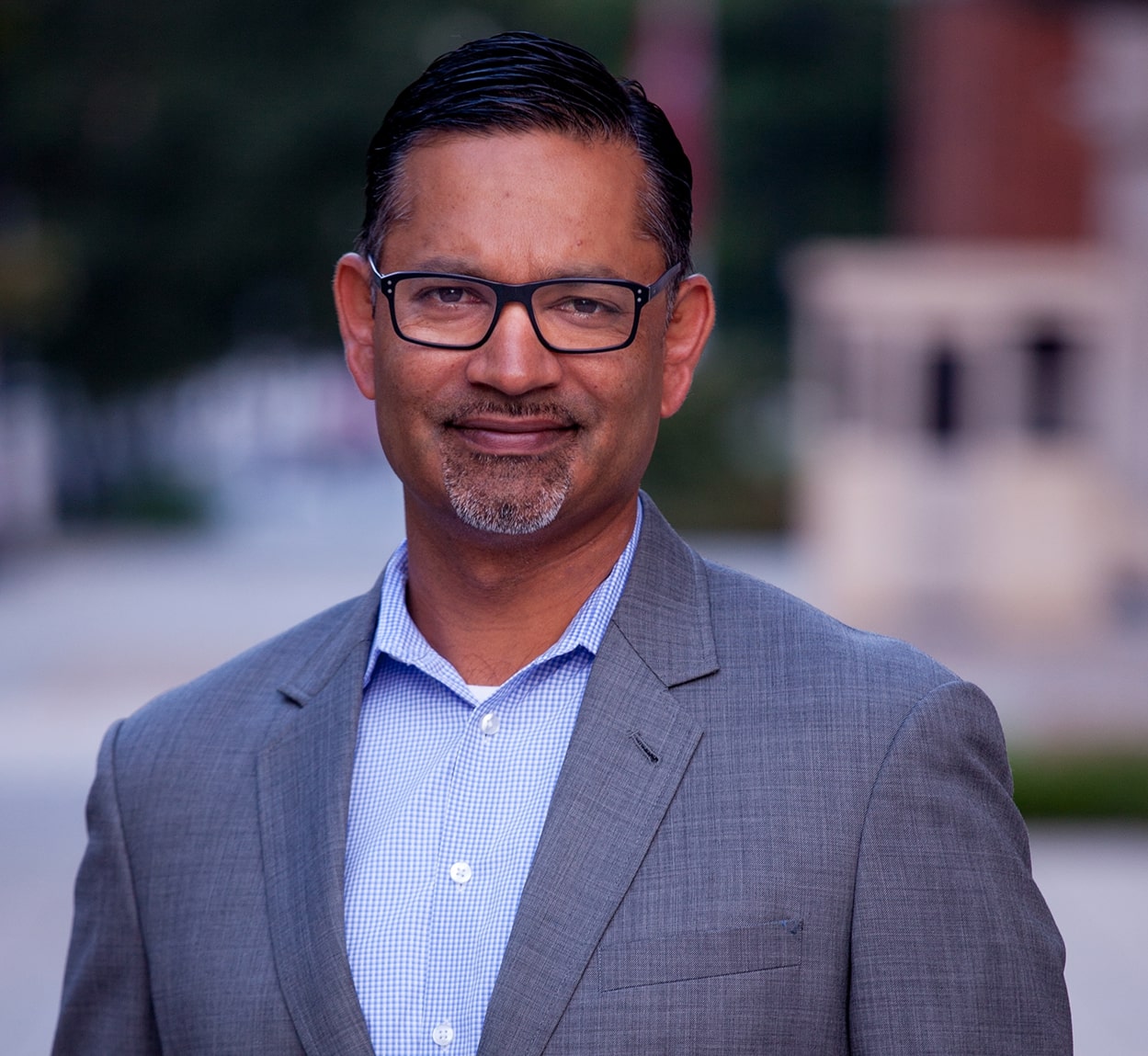 Ali Noorani is the Executive Director of the National Immigration Forum, host of Only in America podcast, and author of “There Goes the Neighborhood: How Communities Overcome Prejudice and Meet the Challenge of American Immigration,” in Washington, D.C. Photo courtesy of The Forum.

Ali Noorani spends nearly all of his time engaging in conversations about immigration with people from across the political spectrum. An author and podcast host, it’s no surprise that he finds power in people’s stories. In fact, he’d much prefer listening to others than talking about himself — a modesty that has allowed him to build trust among his audience.

As Executive Director of the National Immigration Forum (the Forum) since 2008, Ali uses the stories and data that he and his team collect to support a constructive approach to immigration policy. He works to ensure that all voices, including conservative and moderate business, faith, and law enforcement leaders, are represented and heard. The Forum’s mission is to advocate for an immigration system that enables new Americans to gain access to opportunities, skills, and status to thrive. According to Ali, the Forum is unique in that they’re constantly thinking about who they aren’t talking to and prioritizing ways to bring those voices into the conversation.

The people who we try to work alongside would identify as are politically or socially conservative or moderate. They aren’t your typical allies of the immigration movement. But, they become some of our strongest partners for a couple of reasons. First, we meet them where they are, but we don’t leave them there. Second, and most importantly, we respect the values framework through which they see immigrants and immigration. By building a partnership based on trust and mutual respect, we bring new allies into the immigration movement. New allies that can speak to conservative and moderate voters who have authentic questions about the issues the movement faces.

One answer is obviously how people are getting their information. The internet was nowhere near as powerful when I first started, and the importance of trust between a messenger and their audience is much higher today than 10-15 years ago. It’s also no longer about the best policy idea. Powerful stories set the environment for policy change. You can have a great policy idea, but if you don’t have a powerful story to tell, realizing policy change is nearly impossible.

What we’ve found is that when people have an experience with an immigrant or get to hear someone from another country they begin to understand that journey.
The National Immigration Forum (the Forum) has been around since 1982, fighting the good fight. Can you tell us more about the challenges of working with existing structures and implementing new ideas?

We aim to build coalitions that can convey powerful stories to the audiences we are trying to reach. So we’re always trying to bring new players together so we can better understand their interests, what they want to hear about, and what their concerns are around immigration. In any one day, we’re getting really interesting information, which in turn, gives us interesting data points to pull from. For example, no other organization is going to hear from faith leaders, law enforcement officials, and CEOs on why they want immigration reform. To weave together data that ranges from cultural perspectives to public safety needs to economic growth is an incredible opportunity. Success is when we have a coherent story to tell conservative and moderate voters, media and policy makers.

It’s all about the community. Personally, my job is easy. I’m not an immigrant. I was born here. But the Dreamers and the immigrants who are advocating for themselves and their families? It takes 10 times more courage to do what they do than what I’m able to muster. That’s what keeps me motivated. I feel incredibly fortunate to have this job.

You’re the son of Pakistani immigrants. How did your upbringing influence your journey into policy, advocacy, and coalition organizing?

I grew up in the small city of Salinas, CA, with people who didn’t look like me and weren’t part of my cultural identity. At a pretty early age, I learned what it took to get to know people who were different. The ability to be a cultural chameleon has allowed me to become a coalition builder and, frankly, really enjoy it.

America is a country made up of immigrants, and that’s why so many are proud to live here. What does that experience mean for people today?

Last year, we did 26 living room conversations in suburban and rural conservative communities across the country. We started the conversations with the questions, “How do you identify yourself?” and “What does it mean to be an American today?”

The responses that we received in these conversations were everything from “you should start a small business” and “you should be a citizen” to “you should learn English” and “you should believe in the ideals of America.” I would say 60-70 percent of those people were not immigrants, but they knew they were joining a conversation about immigration. There were so many different definitions, but what we found is as long as we listened to and respected their answers, we could have those conversations about what it means to be an American in a country that’s changing so much because of immigration.

There are 65 million people forcibly displaced from their homes around the world today. There are 285 million people who are living in a country other than their home country. Every day, 44,000 people are forced from their homes as refugees. Because of poverty, conflict, and climate change, those numbers are only going to grow. It’s clear that as people move, it’s driving political conflict around the world. For the United States, as ostensibly the most powerful country in the world, we need to be able to have this conversation in a reasonable and thoughtful way.

You host the Only in America podcast (great podcast voice, by the way!). How are you using this as a tool to share messages about immigration and immigrants in our communities?

We’re building an audience that’s as diverse as the guests on the show.  I am always surprised by the impact the stories we share through Only in America have on different communities.

For example, I was recently in Stamford, CT, speaking at a benefit for an organization called Building One Community. Stamford is hiring a new police chief. The executive director of Building One Community is on the search committee and she told me, “I want you to know that I sent the episode featuring three small city police chiefs to the entire search committee so they could hear how [the guests] were using their voices to serve and protect their immigrant communities.”

If people need to hear those voices and the podcast serves that role — and Stamford, at the end of the day, hires a police chief that takes a constructive approach to immigrants and refugees — that’s awesome. That’s gold.

The ability to be a cultural chameleon has allowed me to become a coalition builder and, frankly, really enjoy it.
Did you expect the podcast would have that kind of reach or effect?

[laughs] You know, my staff will tell you that I’ve said, “I don’t know if we should be doing this anymore.” It takes a lot of time to put these things together. But every time I’m about to pull the plug on it, something like the Stamford example happens. Or a donor calls and says, “I learned so much from the podcast because it gives me a sense of who you’re talking to and learning from.”

What drives you to continue lifting up the diverse voices of immigrants?

What we’ve found is that when people have an experience with an immigrant or get to hear someone from another country they begin to understand that journey. I think what happens over time is that Americans, who have been here for generations, come to love the immigrant neighbors who they know. But they still remain afraid of those who they don’t know. So how do we tell the stories that allow Americans to build a bridge between the two?

The 2020 elections are right around the corner. What are you and the Forum doing to prepare?

As a nonpartisan organization, we try to provide our audience of moderates and conservatives with information about immigration that they can trust. We provide that information based on facts and the values that they hold dear. Through the provision of information, we try to help people to take a constructive approach to immigration and ask the tough questions of the candidates who are asking for America’s votes, whether they’re a Democrat or a Republican.

I think we have a big win every day. A good example of this is a reporter with one of the nation’s largest newspapers called today and asked a bunch of detailed questions about the administration’s border policies over the last two years. I connected her to one of our policy staffers, who is a DACA recipient.

This was a win all because he wasn’t just advocating for smarter border policy or talking to a reporter from one of the most influential newspapers in the world, but he was also part of the community that’s directly affected.

What does the next stage of movement building look like for you and the Forum?

It’s very much about continuing to build out support and understanding among conservatives and moderates. We’re trying to do more work in the south and southeast. We also want to use the digital space to directly communicate with voters. The next stage is pretty exciting. As an organization, we try to get smarter and more effective every single day.