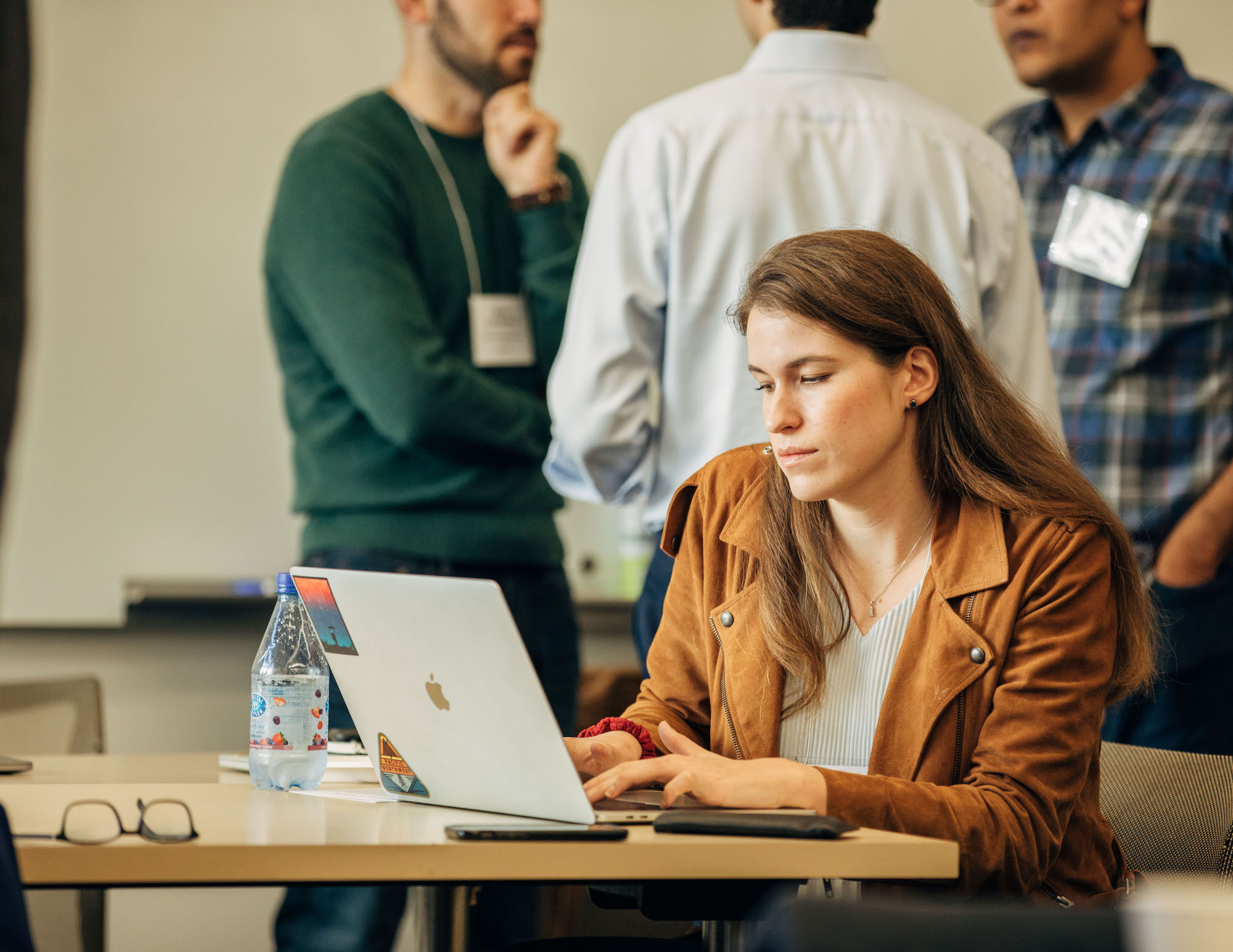 Shannon Axelrod is a Senior Software Engineer with the Science Technology team at the Chan Zuckerberg Initiative. Photo by CZI.

The Chan Zuckerberg Initiative’s science program was founded with a bold mission at its core: support the science and technology that will make it possible to cure, prevent, or manage all diseases by the end of the century. It’s an ambitious goal—and in the age of data, machine learning, and increased collaboration, one that’s becoming more attainable by the day.

At CZI, we’re committed to fulfilling this mission by bringing together engineers, scientists, policymakers, community leaders, and anyone with a stake in the future of biomedicine. We believe that collaboration is key to our success: by bringing different viewpoints to the table, we can facilitate discoveries that will transform what we know about diseases and how we treat them.

Our science team’s work on the Human Cell Atlas, a global effort to map all cells in the human body, is a prime example. Today, we have the tools to see deeper into tissues and understand more about individual cells than ever before. For scientists who study the human body, this data is a gold mine. Researchers can map out where these cells are, how they interact with each other, and how these relationships change when a disease advances throughout the body.

But there’s a challenge, too: to fully leverage this new information, scientists need a way to manage and make sense of these data, including imaging data. That’s where Shannon Axelrod and her team at CZI come in. Together, they’re developing tools to help researchers seamlessly interpret extraordinary amounts of data in new and vital ways.

Reason #1: We work on some of the most exciting advances in biomedical technology that could have incredible real-world impact.

Tell us about your work on CZI’s science tech team. What projects are you most excited about right now?

The science team works on a lot of exciting projects. But one I’m particularly proud of—and the one I spend most of my time working on—is starfish. starfish is an open source data analysis tool that helps scientists turn their raw imaging data into really valuable insights.

Today we have all these amazing new imaging technologies. Things that let us see the inner working of tissues and cells, and really understand what’s happening with them. How do things change on a cellular level if you’re sick, for instance? We can spatially map the RNA and gene expression of different cells and analyze how they interact with each other. All of this gives us a fantastically detailed understanding of the cells in the human body, which could lead to some pretty incredible medical breakthroughs.

The problem is that there are a lot of different methodologies for doing this imaging work. And all these processes yield so much data—and in so many different formats—that it can be really hard for researchers to process or visualize it in useful ways. One scientist might use a method that produces results as a series of colors. Another method might produce a graph. And yet another might produce a barcode. What we’re working on is, how can these scientists really make sense of each other’s results, and then build on each other’s work?

So this is where we hope starfish can be really useful. starfish gives all this data a common computational format, so scientists can more easily extract biological information from their imaging datasets and standardize what they’re seeing. This makes it easier for researchers to unlock new discoveries.

What have you found meaningful about this work in particular?

One thing I learned early on is that researchers wind up spending a ton of time just figuring out how they can get their software to work, on top of their main research job. And that just slows down the breakthroughs we’re all really counting on. But with starfish, we’ve received really positive feedback from folks saying, this is so simple to use, it actually speeds up our work and makes science faster.

That’s great to hear because it means that scientists can really focus on their research instead of worrying about troubleshooting technology. The Allen Institute for Brain Science in Seattle, for example, was able to use starfish to adapt a new assay type really quickly.

It really means a lot to me to be able to come home after work every day and know that I did something meaningful. I made contributions to the scientific community—to advancing our understanding of the world. That’s pretty cool.

Your team designed starfish to be an open-source platform. Why?

starfish is an open-source Python package. It’s freely downloadable if you have Python installed on your computer. We also have it freely available on GitHub, and we’re putting together documentation to explain how to use the package and make the most of this data.

From the beginning, that open access was important to us. In academia, there’s this incentive structure that sometimes rewards scientists for working on research alone rather than working collaboratively on tools that can be shared with everyone. That’s a challenge that we’re really committed to addressing at CZI, and one that we were intentional about tackling with starfish.

The other benefit of making your program openly available is you’re also able to get better feedback. So, for us, the feedback loop for improving starfish relies a lot on people who are using it on the ground. People reach out on GitHub and tell us what feature requests they have, or what issues they’re encountering. And then, on our end, we’ll have meetings to figure out how to fix them. That collaborative process helps us just keep making the tool better.

That’s a lot of feedback coming from a lot of different places. How does this impact the way you think about your own job as one of the people building the tool?

I think people who come from traditional tech backgrounds—myself included—can have their own biases about the right way to build things. Sometimes, there are tradeoffs between wanting to make a product really nice, but that process taking eight months, versus wanting a product to work right now, even if the UI isn’t perfect. I might want to spend more time refining a tool so it works for a hundred different use cases, but a research lab might not need it to be so versatile.

So, there’s a fair amount of compromise that goes into what we do. But, really, figuring out how we want to prioritize different goals is another part of what makes the work so engaging to me.

It’s also part of CZI’s mission to bring different people together, so finding that balance between perspectives is really crucial. It’s been important for me to remember that the way I’ve learned to write software may not always align with what people are asking for.

I feel very lucky to be able to draw on the experiences of people from all walks of life at CZI. Since our teams are so diverse, it really pushes us to design something that works well for the people who need it. It’s a level of collaboration I’ve never seen anywhere else.

Reason #3: We have the autonomy and freedom to solve problems in new ways.

What’s your strategy for tackling big challenges like this? Where do you start?

CZI is a place where you’re encouraged to think outside the box when it comes to solving challenges that arise in your work. And that means having the freedom to be imaginative and to try out new solutions.

It was a bit of a culture shock, honestly. When I came to CZI, my supervisor asked, “What do you want to work on?” And I didn’t know how to respond. I was expecting more prescriptive instructions. But it’s a very different vibe here. It’s not just like, “here’s a list of JIRA tickets, go do these things.” The opportunity for self-direction is enormous.

And once you realize that everyone has your back if you want to try something new, it’s pretty incredible.

Reason #4: We collaborate with the very best scientists and thinkers at the cutting edge of biology and biomedical research.

You alluded that CZI has become a hub for brilliant scientists and engineers. What kind of people have you been able to interact with over the course of your project?

This is such an impressive place. I’ve been in positions where I’ll just be having a casual conversation with somebody at a workshop and then afterward someone will say, “Do you realize who that was?” And it’s someone who invented a scientific process or technological breakthrough—something we talk about all the time. Recently, I attended a lunch with Tim O’Reilly—the guy who founded O’Reilly Media. He is one of the people who really helped push the idea of open source into the mainstream.

Our partner organizations are fantastic, too. I mentioned the Allen Institute—they’re about as cutting-edge as you get. All of this is a reflection of the fact that our teams are made  of people who are the very best at what they do. That’s the whole idea behind CZI—bringing together the best people to come up with the best solutions for the world’s toughest problems.

And did you ever expect you’d be working on teams like this?

No way. Every once in a while, it’ll hit me. I’ll be in a meeting, and I’ll take a look around and realize that the people in the room with me are on the cutting edge of science. And it almost feels like I kind of got away with something—having never gotten a PhD—to be working alongside pioneers and leaders in the scientific community.

I’ll be in meetings with them and they’ll listen to what I say, which is just remarkable. You get to be driving progress in the world of biology and biomedical research without a graduate degree. I’m not sure that you can do that anywhere else.

Reason #5: We’re encouraged to take on roles and responsibilities beyond coding or programming. There are always opportunities for professional growth.

What drew you to CZI originally? What kind of opportunities have you been able to access during your time here?

Before I came here, my knowledge of biology and scientific academia was relatively limited. However, because CZI is a place that values intellectual curiosity, I’ve been able to delve into these topics more. So long as you get your work done, it’s an environment that’s enthusiastic about helping you pursue different interests.

My work allows me to take on so many different roles. Most recently, I’ve been able to collaborate with the Chan Zuckerberg Biohub and University of California, San Francisco (UCSF) to help increase UCSF’s local testing capacity for  COVID-19. It’s nice to feel like I’m contributing in some small way during such a critical time.

Ready to join our team? Apply for your dream engineering job.

Q&A
They’re the Face of COVID-19 Response. They Also Have DACA Status.
Five Reasons to Become an EdTech Engineer: A Q&A with Kari Lee
A Closer Look at the Impact of Record Clearing and Clean Slate Policies
Tag: Science