Behind the Movement with José A. Palma 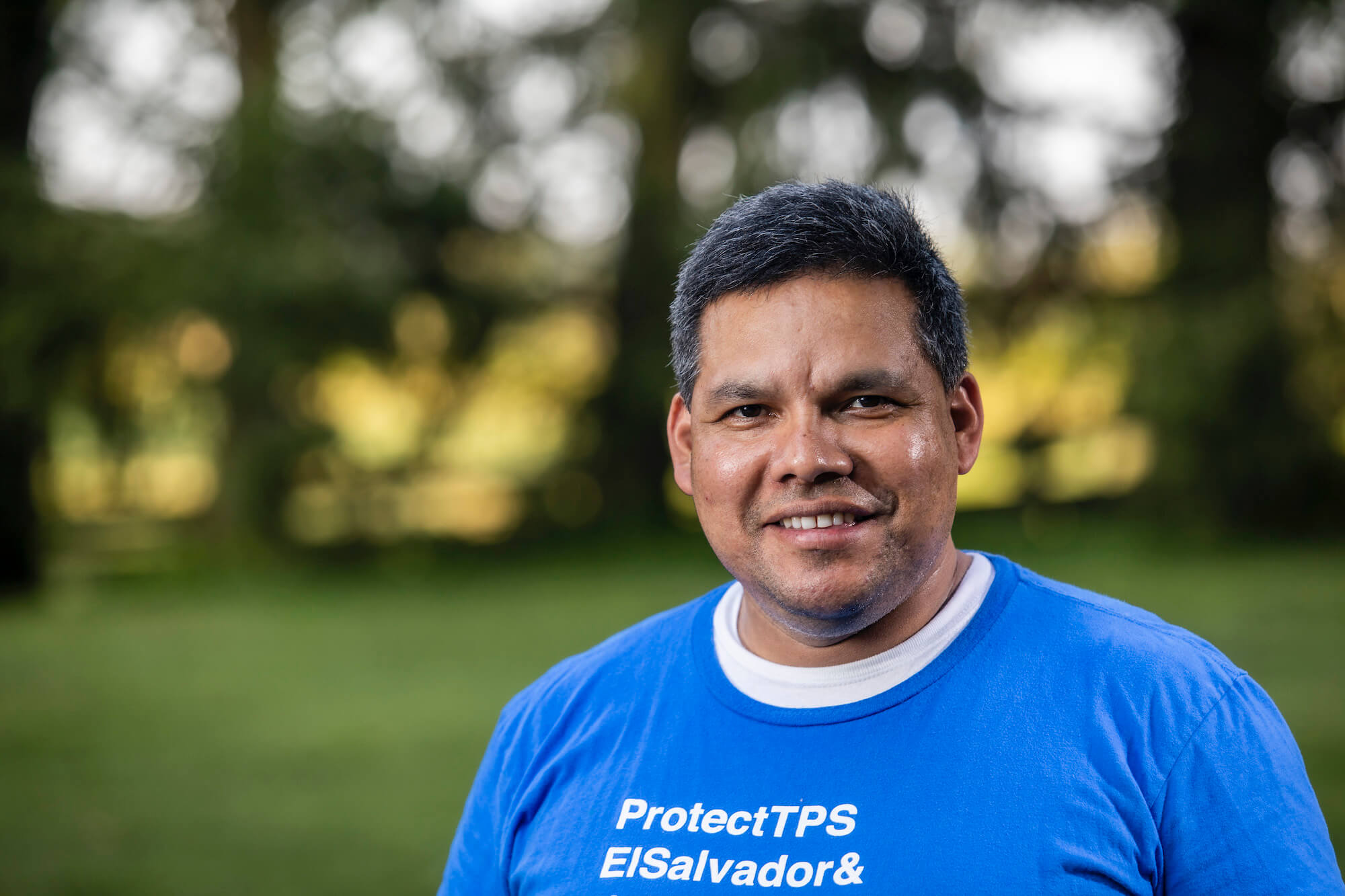 José A. Palma grew up in El Salvador and came from a family that lost everything during the Salvadoran Civil War — a war that lasted 13 years. They moved as refugees, and José was forced to work at a young age so his family could survive.

When José arrived in America in 1998, he was undocumented. Today, he’s a Temporary Protected Status (TPS) holder. This status is offered to eligible individuals from certain countries (or parts of countries) who are already in the United States.

José was eager to contribute to his new home and build a better life for himself. So, he found work in a factory in Massachusetts and then as a dishwasher in upscale downtown Boston restaurants. He was also attending school at the same time and achieved his Associate of Science Degree in Paralegal Studies. José dreamed of becoming an attorney and community organizer, and his hard work paid off when he secured the Legal Program Coordinator position at Justice at Work.

In 2017, José joined the National TPS Alliance as a volunteer and in 2019 took a one-year temporary leave from Justice at Work to serve as NTPSA’s spokesperson and coordinator. Since September 2016, announcements of termination of TPS and Deferred Enforced Departure (DED) for 13 countries started rolling in. José‘s life in the U.S. suddenly had an expiration date.* Today, more than 400,000 recipients are held in place by litigation (Ramos v. Nielsen). The NTPSA is a coalition of more than 60 local committees and organizations as well as nearly 1,000 TPS holders across the country that are mobilizing to push Congress for a pathway to citizenship for TPS and DED holders.

José said he’s like the glue that helps keep these committees and organizations together. Tenacious, committed and unwavering in his support, he continues to fight for TPS holders and other immigrants but risks being deported if a long-term solution isn’t found.

When I first came across the [U.S.] border, I didn’t make it. I was caught and arrested by immigration. After entering into a detention center in Florence, Arizona, I had to apply for political asylum. I spent a lot of money paying attorneys to help me with the case and I wasn’t satisfied with the job. I had a little bit of experience understanding the law and my experience as an undocumented immigrant coming to the U.S. so I thought it would be impactful for me to become an attorney.

I enrolled in ESL classes to learn English. Then I enrolled in college. I was able to do this because I had TPS and access to in-state tuition opportunities, but some of my family members and friends didn’t. My mother and my father didn’t know how to read so they were always pushing education.

I was frustrated that not everyone had the same access and opportunities to higher education and making a better life for themselves.

I think, when people say America is a country of immigrants, it’s a double-edged sword.

Some people use it to cover the racism and hate against others. And some people feel that this is a very strong value. So nowadays, I don’t think it means as much as it used to.

Half a million people under TPS and DED are at risk of being deported. Describe the urgency around taking action to stop this from happening.

Yeah, you know, sometimes it’s difficult to really understand what’s happening. People with TPS have been protected for decades and contributing to society during this time. Even though we have the documentation, TPS holders are now being denied drivers’ licenses, jobs, training and health insurance because of the fear that our immigration status may change at any moment. We need legislation that continues to protect this community so we all thrive.

What do you wish more people knew about TPS holders?

We are important to society. We work hard and hold jobs that allow us to participate in community activities in places where we live. You know, there was a moment in my life when I was working and I was also volunteering as a soccer coach. These are the stories that often go untold.

Many of us have given the best years of our lives to this country and we feel proud of that. I should be given the opportunity to continue contributing and making sure my kids will be able to achieve their dreams and contribute, too.

You recently spoke before Congress and called on members to look beyond labels and see TPS holders as people and hear their stories. What was going through your mind as you spoke? What outcome were you hoping for?

I was thinking about the ways our current administration paints immigrants. I wanted to highlight people’s real stories so legislators could see that we’re humans just like them. I wanted them to know the woman who has been struggling to keep her business open or my friend in Massachusetts, who is a TPS holder, owns a small business and employs a majority of U.S. citizens. If he loses his status, his business will be shut down and nearly 30 people will lose their jobs. There’s my friend in Dallas, whose son is enlisting to the Marines to defend our country. Yet, at the same time, his parents are at risk of losing their immigration status.

Those are the stories I was trying to highlight. I don’t know if I achieved the goal. I don’t think I was able to, in a very short period of time, give the respect that the TPS community deserves. But I tried. [Editor’s Note: Watch José’s testimony for more.]

We need legislation that continues to protect this community so we all thrive.

I think, right now, something magical is happening with the TPS campaign [for permanent residency]. I have seen people from many different backgrounds and ethnic groups and groups of people directly impacted. They feel compelled to join the effort to make sure that everyone who’s coming to the U.S. is able to achieve their dreams. So many people are willing to share their stories and talk publicly and lead the campaign.

Nothing will move without money. People can contribute money to organizations that are working directly with TPS holders [like NTPSA]. They can also advocate for the campaign by speaking to faith leaders, business owners, and other community members for their support.

Good question. I’ll think about my fellow TPS recipients and allies who made the ultimate sacrifice to come to the U.S. I also think about all of the people who joined our three-month Journey for Justice tour across America. Many of them took time off to ride a bus and fight for this cause. They all give me strength and hope.

*On October 28, 2019, the U.S. government announced they would give TPS holders from El Salvador an additional year to repatriate themselves back to their home countries. Organizations like the NTPSA are still fighting for a permanent solution for all TPS and DED holders.