MCLOUD, Okla. (February 11, 2019) — Today, The Last Mile (TLM), an organization that prepares incarcerated individuals for successful reentry through business and technology training, launched the first computer coding course to be offered inside Mabel Bassett Correctional Center. This expansion into Oklahoma was made possible by the Chan Zuckerberg Initiative, George Kaiser Family Foundation, and the Lobeck Taylor Family Foundation, in partnership with the Oklahoma Department of Corrections and other local actors.

According to a recent report by FWD.us, one in two Americans have an immediate family member currently or previously incarcerated. Oklahoma has the highest incarceration rate in the country, with a female incarceration rate that is more than twice the national average. These troubling statistics have held back Oklahoma’s families, communities, and economy.

In response, a bipartisan coalition is working to safely reduce incarceration in the state and expand opportunities for people with felony convictions. In 2016, Oklahoma voters passed sentencing reforms at the ballot and, since then, the State Legislature passed additional reforms to build on the voter-backed improvements. Just last week, Oklahoma Governor Kevin Stitt called for further legislative action during the 2019 session to keep families together and reduce unnecessarily long prison terms, and begin moving Oklahoma out of its spot as the nation’s top incarcerator.

“Our mission at The Last Mile is to provide marketable skills that result in gainful employment, because we believe that jobs are a critical component to successful reentry,” said Beverly Parenti, Executive Director and Co-Founder of The Last Mile. “When I learned that Oklahoma has the highest female incarceration rate, I knew we could have a significant impact on this population. The Last Mile’s coding program provides a multitude of opportunities for women, shifts perceptions, and returns graduates home to their communities and families in a positive way.”

Women at Mabel Bassett Correctional Center in McLoud, Oklahoma, can now enroll in the year-long training program, where they will build software engineering skills and gain exposure to real-world projects. They will do this without access to the internet, given restrictions within the prison. Students use a special software programming platform that mimics the internet while also giving participants a live coding experience.

“This program gives our inmates something many have never had before – something to be proud of,” said Oklahoma Department of Corrections Director Joe M. Allbaugh. “With the skills this program imparts, these students can leave their felony past behind, no longer be defined by it, and become functioning, participating members of society.”

Seventy-five percent of the program’s eighteen students are mothers with less than three years remaining on their sentences. They will join nearly 500 men and women across twelve prisons in four states that have moved through the program. 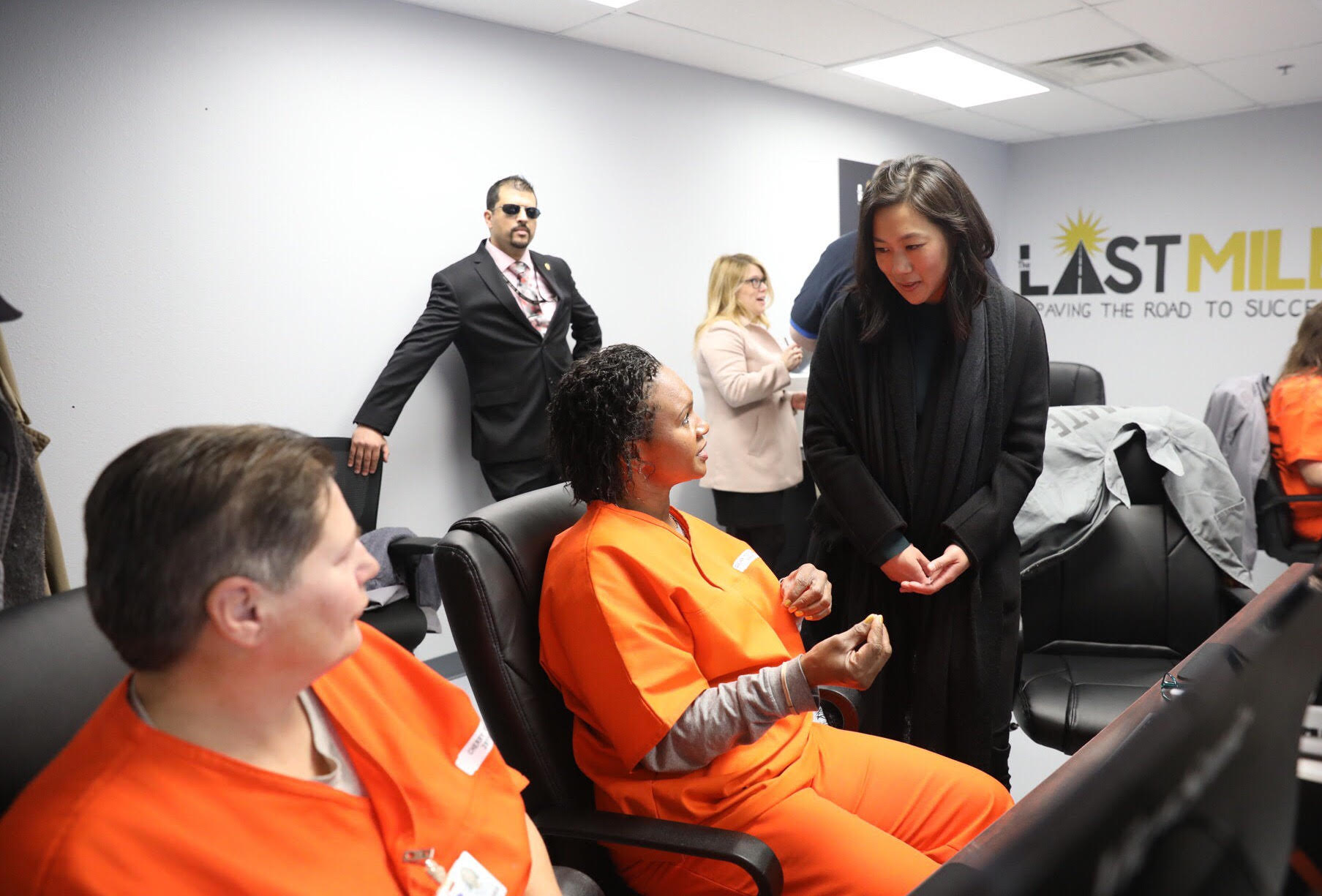 “This program will ensure that I never have to make any choices that will lead me back to prison,” said Toc’Quianna Culver, The Last Mile student at Mabel Bassett. “For the first time in my life, I’ll have the opportunity to succeed instead of merely existing. This will enable me to give a better life to my children and grandchildren by showing them that redemption from a mistake is possible, and so is success following that mistake.”

Graduates currently work for a variety of employers, including the Chan Zuckerberg Initiative, Fandom, software startups, and others.

“The Last Mile helps people build the skills they need to enter the workforce, support their families and give back to communities after incarceration,” said Dr. Priscilla Chan, Co-Founder of the Chan Zuckerberg Initiative. “With a zero percent recidivism rate among graduates, it’s an inspiring example of what’s possible when people involved with the justice system have a fair chance to move forward.”

“We are pleased to help launch The Last Mile at Mabel Bassett and honored to work with colleagues like CZI, LTFF and partners at DOC in this important effort,” said Ken Levit, Executive Director of George Kaiser Family Foundation. “Sadly, Oklahoma has led the nation in its incarceration rate of women for 26 years. We need a range of interventions to break this cycle, and employment is a critical piece of the puzzle. Through the unique training opportunities this program offers, individuals leaving prison will have access to a career path that offers a living wage and the opportunity to build a better future.”

“The mission of LTFF is to decrease barriers associated with dreaming big. We are passionate about utilizing innovative solutions to systemic problems, so we were instantly attracted to The Last Mile’s approach that not only builds the Oklahoma workforce from within, but builds community while also giving a second chance to justice system-involved women. The Last Mile uses an innovative framework that encourages entrepreneurship and skill-building with a group of women that would typically face great barriers to pursuing those dreams. I’ve had the opportunity to meet graduates of this program from San Quentin State Prison who have rebuilt their lives and left prison with a quality job, benefits and a purpose. We’re pleased at the opportunity to collaborate with such a status-quo changing organization, as well as our partners at CZI, GKFF and the DOC,” said LTFF CEO and President Elizabeth Frame Ellison. 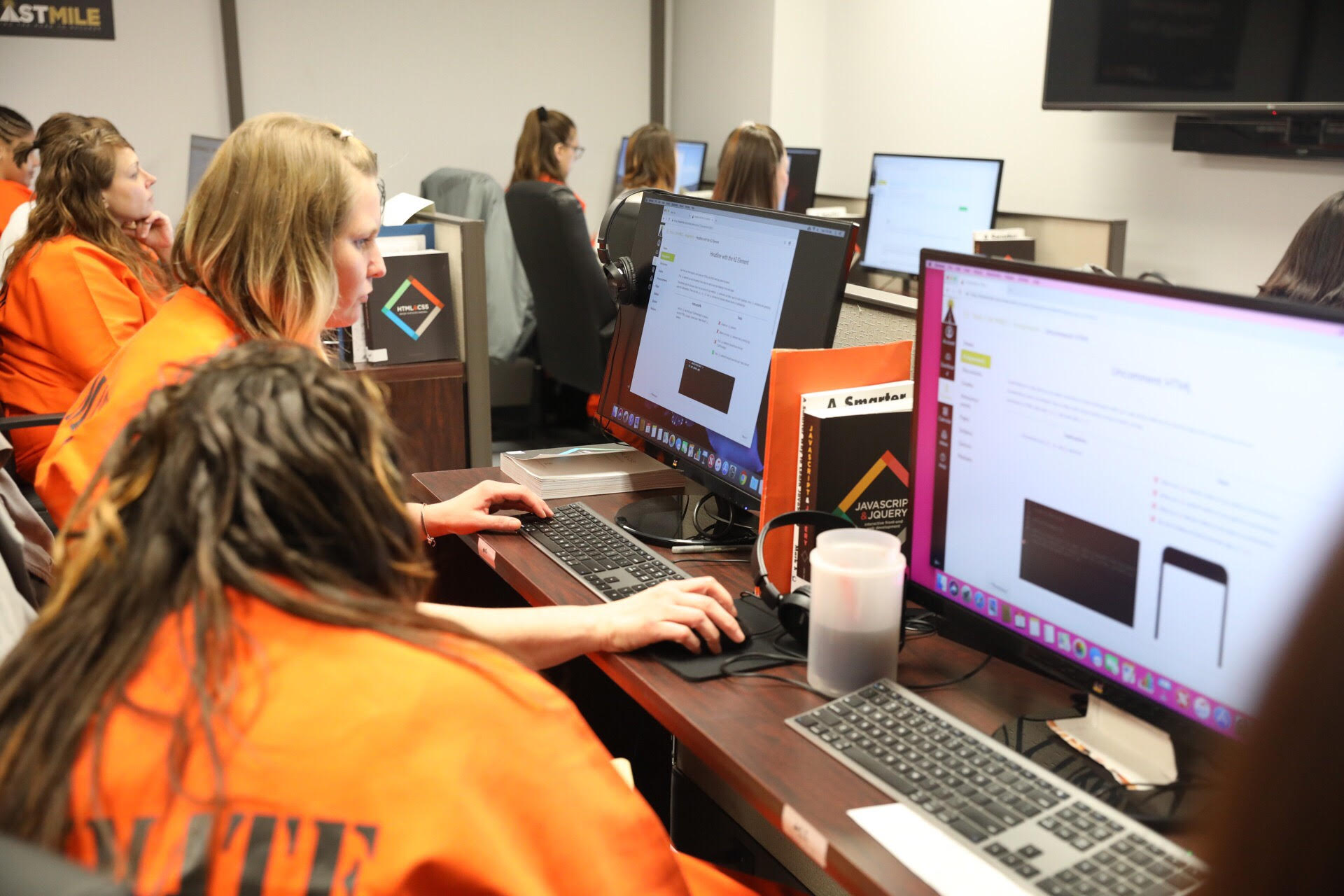 The Last Mile will officially launch today with an event and ribbon-cutting ceremony at Mabel Bassett. Speakers to include: Beverly Parenti, Co-founder of The Last Mile; MC Hammer, The Last Mile Board Member; Aly Tamboura, The Last Mile Graduate and CZI employee; and representatives from the Oklahoma Department of Corrections and the new student cohort. 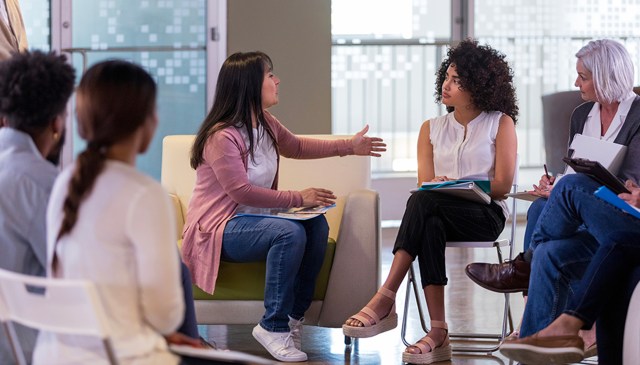